More4kids
Add Comment
At your first prenatal visit and again in the late second or early third trimester, your doctor will test your blood for iron. A low level of iron puts you at increased risk of developing anemia. Here is some additional information about iron levels during pregnancy...
by Patricia Hughes 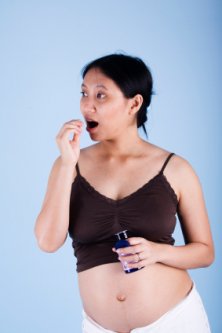 At your first prenatal visit and again in the late second or early third trimester, your doctor will test your blood for iron. A low level of iron puts you at increased risk of developing anemia. Approximately 20 percent of pregnant women suffer from anemia caused by an iron deficiency in pregnancy.
The reason iron deficiency is so common in pregnancy is that women require about twice as much iron as when they are not pregnant. During pregnancy, your blood volume increases by about fifty percent, which can result in an iron deficiency. This often occurs in the second trimester, as the blood volume increases and the baby begins to demand more iron. For this reason, you will be tested again, even if your iron was fine in early pregnancy.
Women who experience iron deficiency in pregnancy are at risk of developing anemia. The biggest risks to the baby are low birth weight and preterm labor. A study in California showed that women who experience iron deficiency anemia in the second trimester are twice as likely to have a preterm labor as women with normal levels of iron. Check out: http://www.ajcn.org/cgi/content/full/71/5/1280S
Other factors can put an individual woman at an increased risk of developing an iron deficiency. If you have been diagnosed with anemia in the past, you may be more likely to suffer iron deficiency anemia during pregnancy. Other risk factors include a multiple pregnancy, getting pregnant within a year of having a baby and a diet that is low in iron.
The best way to prevent iron deficiency anemia is to increase your intake of iron. When you are planning meals and grocery shopping, be sure to include foods that are a source of iron at each meal. It is easier to prevent an iron deficiency than it is to treat it. In addition, iron from food sources is more easily absorbed by the body than iron pills.
Sources of Iron
Sometimes diet is not enough to increase the iron level in women with a low level of iron in the blood. If the blood test shows an iron deficiency or anemia, your doctor will recommend that you take an iron supplement. Your health care provider will tell you how much iron to take. To increase absorption of iron, do not take it with milk. Calcium can hinder the absorption of iron. Instead, take it with a citrus juice, such as orange or grapefruit juice, which aids in the absorption of iron.
The biggest side effect of taking an iron supplement is constipation. This can be a side effect of pregnancy even without an iron supplement, but taking the pills often makes it worse. You can help prevent constipation by increasing the amount of water that you drink. A diet rich in fruits and vegetables will also help prevent constipation.
For more information on preventing iron deficiency: http://www.nhlbi.nih.gov/health/dci/Diseases/ida/ida_prevention.html
And remember, before changing your diet or taking any supplements during pregnancy, always check with your health care professional.
Biography
Patricia Hughes is a freelance writer and mother of four. Patricia has a Bachelor’s Degree in Elementary Education from Florida Atlantic University. She has written extensively on pregnancy, childbirth, parenting and breastfeeding. In addition, she has written about home décor and travel.
No part of this article may be copied or reproduced in any form without the express permission of More4Kids Inc © 2009 All Rights Reserved
[widget id="ad_unit-546924761"/]

Cord Blood Banking – Is It Worth The Investment?
Pregnancy and Food Additives
Comment