More4kids
Add Comment
A miscarriage is what happens when a mother loses a pregnancy in the first 20 weeks of gestation, if you lose the fetus after 20 weeks it is considered a preterm birth or a still born. It is perhaps one of the most devastating things that can happen when you are pregnant. 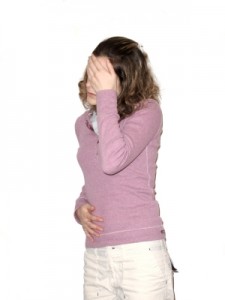 One of the most devastating things that can happen when you are pregnant is a miscarriage. A miscarriage is what happens when a mother loses a pregnancy in the first 20 weeks of gestation, if you lose the fetus after 20 weeks it is considered a preterm birth or a still born. All of which are terrible and can be devastating to any expecting mother. Note I say mother, not woman as many places will say. I decided to use mother based on my own experience with a miscarriage.

For those of you that have read my other pregnancy pieces know that last year I had a very long and sometimes difficult pregnancy which resulted in one of the most precious little girls I have ever known. What many may not know that it took my husband and I over a year to conceive and we had a miscarriage along the way.

The doctor that I had at the time completely dismissed it. He told me that I probably wasn’t pregnant at all, and that it was just a heavy period. However, my husband and I had been trying for a long time, and that time… we had taken 4 different pregnancy tests over a week…each of which were positive. Then I got influenza, had a temperature of 108 and was miserable. I felt cramping… and there was a lot of blood… but it wasn’t just blood. Now, with my first child I bled throughout the beginning of the pregnancy, but this was different and that is what I told the doctor. Who then proceeded to blow me off and we took a urine pregnancy test in the office and it was negative. I passed out on the way out of the office, my husband and I in tears… devastated.

It wasn’t until I was pregnant again, and going to a new doctor and a Geneticist telling them both what had happened that the doctor looked at me and said, “You were pregnant,” the geneticist explained what had probably happened and we looked at whether or not it would happen again. You have to know this, 90% of miscarriages are unavoidable. There is nothing you can do to prevent them. According to the Geneticists, more women probably have a miscarriage and don’t even realize it because it happens so soon after the egg is fertilized. They look at it and just think that they are having a heavier period than normal.

The majority of those miscarriages are due to chromosomal problems in the fetus, and they typically have nothing to do with you. There are also miscarriages that take place due to external factors such as malnutrition, infection, stress, maternal trauma, or drug and alcohol use. It is important that you know normal activities such as sex, working out, nausea and vomiting or lifting heavy objects do not typically cause a miscarriage unless you are high risk. It is important that if you are trying to get pregnant or suspect that you may be pregnant that you talk with your doctor as soon as possible.

The majority of miscarriages, regardless of cause, happen between the 7th and 12th week of pregnancy. And if it is going to happen there is nothing that anyone can do to stop it. When we were pregnant again after the miscarriage, we had a number of very scary moments when it seemed as though we would lose this baby as well. Frantically calling the doctor, she would get on the phone with me and tell me, that if it was going to happen, there wasn’t anything that they could do to stop it. Then I would be sent for an ultrasound to see whether or not we were still pregnant.

With this last pregnancy I had 7 ultrasounds. Four of them within the first trimester, it was the second one that I had that was the worse… the tech wouldn’t tell us anything and we didn’t see the little flutter (which was the heart beat) and when I asked if everything was okay, her response was “We aren’t suppose to say anything, you have to wait for the doctor. “ Immediately to me, as a former nurse, that meant something was wrong. She couldn’t find the heartbeat, so she went to get someone else to come in and try. I couldn’t even look. I couldn’t be more gracious to the second tech, who was able to find the heartbeat and happily report the fetus was fine.

“Somewhere between 10 and 20 percent of all known pregnancies end in miscarriage. In many cases a woman may have a miscarriage without even knowing she was pregnant. It is estimatent of all fertilized eggs are lost.” (http://www.babble.com/miscarriage-pregnancy-health-causes-risks)

Just because miscarriages are common, does not mean that they are easy. It is okay for you to feel emotional, a sense of loss and be sad. It’s important that you talk to someone about the way you are feeling, and talk with your medical professional about your risks.

Biography
Jennifer Shakeel is a writer and former nurse. As a mother of two incredible children, I am here to share with you what I have learned about parenting. One of my children has ADD, our journey of learning to come to terms with the diagnosis and figuring out what works best for us has been a challenge and a joy. Our son was diagnosed about two and half years ago, and we have had our ups and downs, joys and sorrows. If I can just offer you one day of hope or one idea that may work to help you and your family then I know that my purpose has been fulfilled.